“get inspired to act against Climate Change”

Climate Heroes is a non-profit multimedia project and educational essay for the public, which gathers worldwide stories of men and women, citizens, scientists, media, politicians and entrepreneurs who have started acting to elevate consciousness about, mitigate, or understand Climate Change. By the positive examples they provide, we trust they can inspire the great many to start mitigating climate change with small daily acts, or larger endeavours.

Climate Heroes is an independent non-profit registered in France. 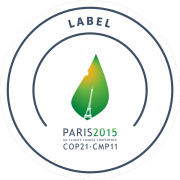 Climate Heroes received the official COP 21 label, in preparation for the Conference of Parties, or United Nations Climate Change Conference, in Paris this December 2015. The label is issued by the Secretary General for COP21 and the French Ministry of Environment.

Who are the Climate Heroes and what do they do?

Climate Heroes come from all walks of life. From a local village activist to a globe trotting scientist. A respected religious figure to a youth educator. All are very different and from varied backgrounds, but all of them fight to mitigate Climate Change in their own way and ultimately have the same goal: to preserve and improve the natural environment around us. By shedding the light on those men and women who stand out by their values and actions to help mitigate Climate Change for the wealth of all, and by giving them a platform to voice their thoughts and experiences, we want to introduce them across the globe. So, as inspirational models for the rest of us, we can all learn from them.

INCLUSION OF A HERO IS BASED ON THE FOLLOWING CRITERIA:

Yet, ultimately they must be inspiring. Passionate people who will spread their knowledge, their issues and their voice on the one issue that is affecting all of us.

Max is a French documentary photographer based in Paris. He founded Climate Heroes in 2010 and has lead the Climate Heroes team since then. He has been published and commissioned by GEO France, Wired, Le Monde, Die Zeit, and has been exhibited in France and China for his work.

A public speaker, he appeared on multiple occasions to present Climate Heroes in conferences including Creative Mornings in Paris, the UNFCCC in New York during the 2014 Climate March, and in 2018 he gave a TEDx talk in Wageningen, The Netherlands, about Climate Heroes and his work for the preservation of our planet.

Luke is a multi-award winning documentary photographer and founding member of Climate Heroes based in Bangkok, Thailand. He has worked for and been assigned by such clients as National Geographic Magazine, The Smithsonian Magazine, The New York Times and the The Guardian UK. When he is doing undertaking commissions he is working on personal projects around the globe.

Nick is a videographer and photographer based in Bangkok, Thailand. His video and photography work has taken him around the region as well as across the globe.

His work has been published in various international publications, including The International New York Times, CNN and Time Magazine. He also works for a number of international humanitarian organizations, as well as commercial clients.

Nick has been based in Southeast Asia since 2008 and is a founding member of Ruom.

Thomas is passionate about documenting climate change and the effects of development in the Mekong region.

Thomas’s multimedia work have been featured in campaigns for international NGOs and INGOs, such as WWF, UNDP, USAID, and UNICEF. His photographs and videos have also been published in international magazines and newspapers such as The New York Times, Al Jazeera and The Guardian.

He has been working in Southeast Asia since 2010 and is currently based in Phnom Penh, Cambodia.

MEET OUR AFFILIATE PHOTOGRAPHERS AND WRITERS →